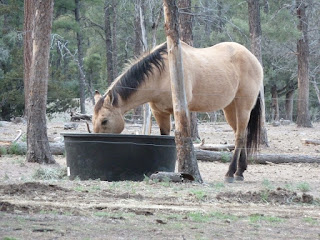 What can I say about this beauty?  Well, for starters, his name is Buck and he was my assigned horse for my weeks stay at the Geronimo Trails Guest Ranch. 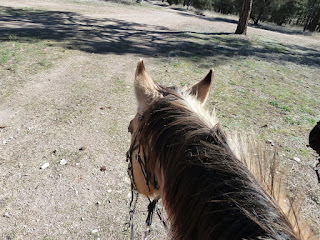 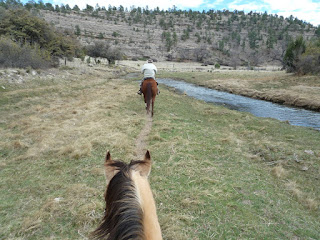 I had eyed him the first day we had gotten to the ranch, as we walked around the property.  Buck was grazing right behind our cabin.  I thought he was a Palomino, but irrespective, he was gorgeous.  I wanted him.  Well, as with the Universe, when you ask, you shall receive, and so I did.  Turns out Buck is a quarter horse and they come in all colors.  Easy mistake.  After all, Palominos are known for their color.  Anyway, I digress, Buck became my horse for the week.  Yay!
So, there's a lot I've learned about Buck in the week that I rode him.  The first thing is that, when we are all getting ready to get off on a trail ride, Buck likes to get out ahead.  As you can see on the right.  He's off.  He wants to get a head start.  That's pretty much all he gets, is a head start, because he just chills after that and decides that since he has the starting position, he can set the pace.  Yes, that's great and all, if his pace was that of the others.  No.  Not Buck.  His pace is New Mexico time.  Desi Standard Time.  Island Time.  Whatever you want to call it.  That's Buck's pace.  I'm constantly thinking "come on Buck!  Keep up!" and I'm sure Buck is like "Whatever!  Just chill and stop and smell the roses woman!
As you can see, that's my husband, on his horse Rooster and he's about 3 horses length ahead of us.  It took me some time to get used to Buck being so far behind.  So, I would cheat.  I would prompt him to go faster and he would get in a trot and catch up.  That's the interesting thing about Buck.  He was very responsive.  I could get him to trot, go right, go left, backwards, without any problems.  Walk faster?  No!  That was Buck's weakness. 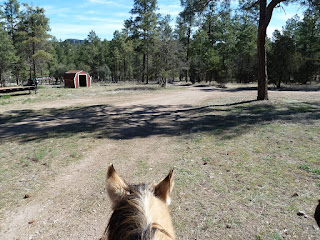 There were times I would get Buck to trot, but then it wasn't such a good idea because when one horse trots, the other horses want to follow suit.  I was just trying to get Buck to keep up.  On our last day and our last trail ride, I got the opportunity to lope with Buck.  Buck has no issues loping or even keeping pace while loping. He just doesn't like to do it on a walk.
The other thing about Buck is that he trips a lot (about 6 - 10 times a ride), but he's pretty surefooted when he needs to be.  When crossing the streams, he's nervous and he takes the safe path and it's not that big a deal.  On a casual walk, suddenly, he'll just slide a little.  "Buck!  What is going on?"  Well, of course, the horse doesn't answer back. 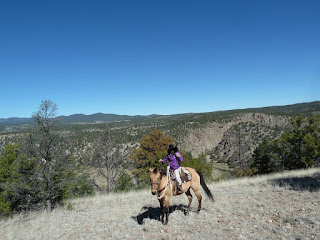 It took me a while to realize that Buck was mostly his own person.  He wanted to do his own thing and didn't really want to be out walking.  He would have liked grazing back at the ranch or maybe loping. 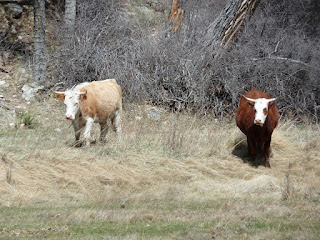 As you ride a horse, you begin to learn about him/her and early on I learned that my Buck was a scaredy cat.  Horses have herd instincts, so when one horse freaks out, the others do too.  A couple of times, maybe a horse up ahead yelped and wanted to take off, but most of the time, it was Buck.  As I began to learn more about Buck and his fear of just about anything - a falling leaf, a squirrel, I started to keep a tighter rein on him.
There were several times I had to pull back the reins to stop him from wherever he wanted to suddenly head off to, because something in the bushes startled him.
What is Buck truly afraid of though?  Well, he is most certainly afraid of these angus cows.  Yes, the other horses have had a show down with these cows.  I don't know if I have the picture, but there's a calf that these cows are protecting and so obviously, they are going to be on high alert.  If the cow so much as moves, Buck freaks out.  Over my stay in the ranch, I was a bit scared of the cows because of their intimidation and poor Buck, responded in fear.  Yes, I see cows, I'm tightening my reins.  Can't take a chance.  Buck will freak out. 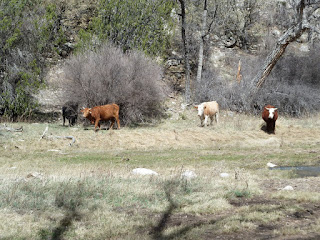 Luck for me, although Buck walked slow and was several paces behind, we all stopped when we saw the cows and we would proceed with extreme caution.  So, Buck could catch up and wasn't way behind, he was close enough to the other horses.
Buck and I visited some amazing places.  The scenery cannot be captured with a camera.  I'm beginning to realize with my trips that while I have some pictures, it's so different when you are actually there.  The scale and grandeur of the area is something that has to be experienced.
I wish I remember the name of the places that are in the photographs below but that rock is a beauty.  The picture on the left looks like a submarine to me, but I can't recall what it was called.  This trip was a couple of months ago and I didn't take notes, so unfortunately, I cannot totally help, but if you do a vacation down by the Gila National Forest, you'll get to see this too. 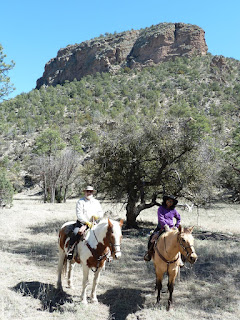 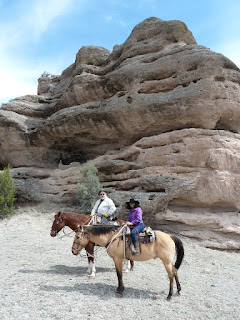 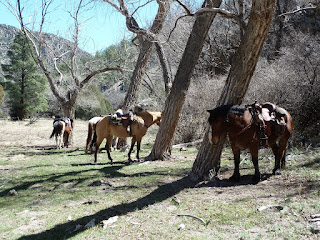 This picture on the left is at one of the picnic spots.  We would ride, find a spot to secure the horses, and then eat sandwiches out in the open.  It was just peaceful.  Oh the dark brown horse on the right of the picture is Johnny.  He was Kelly's (one of the wrangler) horse and he was a youngster.  He did not like Buck going at the pace Buck was going at and wanted to pass him up, but then Buck being his senior would not let him and purposely cross tracks to get in front of him.  Poor Johnny.  I can see Buck as the old man telling the young 'un to slow down. 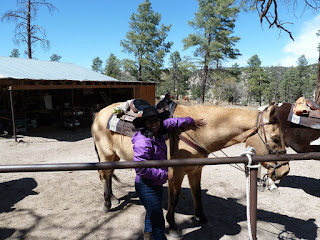 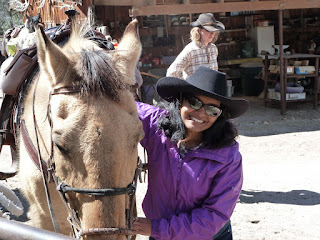 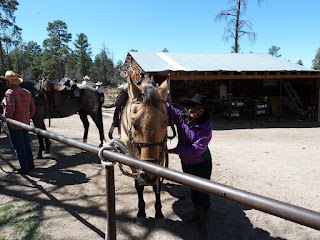 These last pictures were taken at the beginning of the day, but usually at the end of the day we would bring Buck back, take his saddle off and give him a rub down with the two different brushes so he can enjoy himself and be rewarded for a job well done.  Buck loved his rub down and he especially loved getting his face rubbed because Buck would get itches on his face.  But in general, he loved it when I would brush him down.  I would use the metal brush and then the vinyl one.  At times, he would turn to me almost asking me to stop brushing his back and brush his face again.  So, I did!  He was lovable.
I will go through my other pictures and see if I have a more perfect one of Buck, but despite shadow and all, you can see him.  I love his dark mane that hangs to his left always.  I found that unique about him.  I miss you, Buck.  You were very special to me.

Best wishes to all and safe travels,
TTR.
Posted by TTR at 8:01 PM