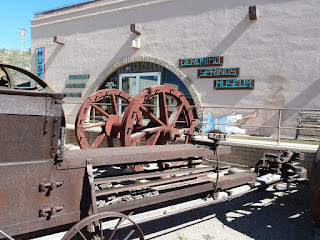 So this is the Geronimo Springs Museum, in Truth or Consequences, New Mexico.  On our way to the guest ranch, I thought it would be better to halt our stay at T or C, because of fatigue, and I didn't want to drive 4 hours to the ranch on the day we landed.  It turns out to be a good decision except, I didn't know what to do in this small town.  This is where being a Facebook stalker comes in handy.  I was constantly looking at and commenting on Geronimo Trails Guest Ranch's FB page and one of my comments was that I was in T or C, just a day away.  They commented that I needed to visit this museum.

So, I did.  Lot of Antiques and just plain "old stuff".  I hope you all enjoy my pictures.  I'll try to explain as much as I can, but a picture speaks a thousand words? 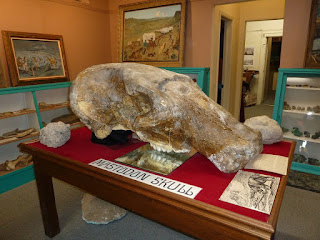 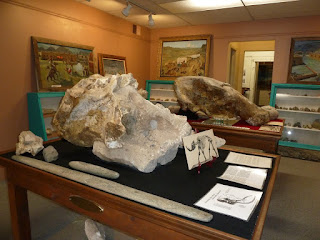 So as you can see above, there are 2 skulls.  The picture of the left is the Mastodon.  The picture on the right is the one showing both the woolly mammoth and the mastodon behind it.  I just thought it was neat.  I think there was mention that archeologists found whole woolly mammoths frozen and that's how they knew that these animals had fur on them. 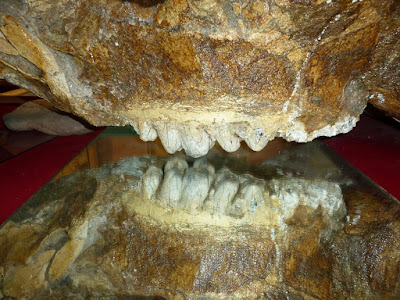 As you can see above, this is the mastodon's teeth.  Being a dentist, I couldn't resist this picture.  Interesting side story, there were "do not touch" signs there.  I wanted to feel what these teeth felt like.  Perhaps I wanted to tap them.  I'm crazy that way.  They say it's easier to ask for forgiveness than permission.  No, I asked for permission.  I figured the woman would say no, but she said yes!  The teeth felt like plastic.  Did not feel real to me.  What do I know?  Perhaps with my dental tools, this might have been a different story.  OK, on with the pictures. 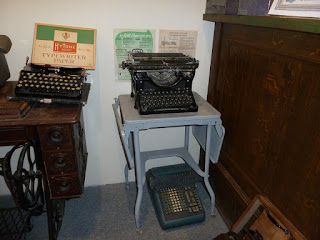 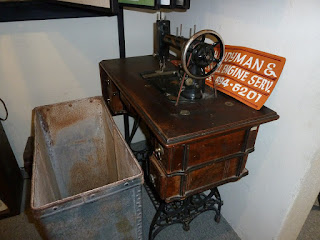 Old typewriters and sewing machines.  I am quite sure my grandmother owned a sewing machine like this and if my mom would see this, she would not be impressed with the picture.  She'd be like, "this is what we grew up with".  Well, I remember them, but they are old enough to be "cool". 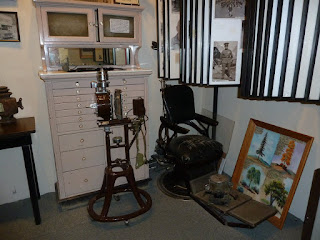 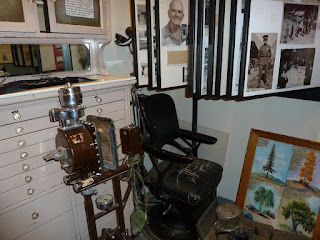 Yes,  You guessed right.  Dental chairs from the 1940s.  After the practice was taken over, the new dentist replaced all the equipment in the 47 years of his practice.  Wow!  He practiced for 47 years.  That's great.  When the museum was opened, he donated it to them and so here are the pictures.  If you'll see on the top right of the pictures, there's a series of framed pictures hanging there.  They had the history of the town.  It was called Hot Springs, NM and the name was changed to Truth or Consequences, based on the town vote and the popularity of a TV show at that time.  So, the picture board there was interesting, before and after pictures of the town. 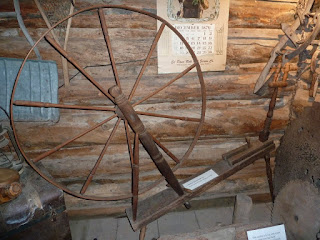 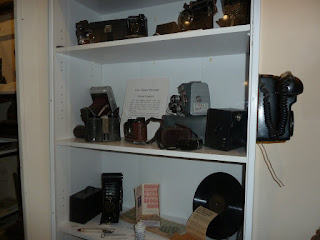 I love the spindle!  It's so ancient.  I keep thinking of Rumplestilkin whenever I see one.  Of course, cameras from the past. 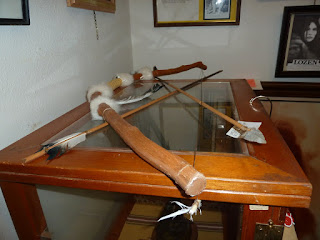 The museum, as the name suggests talks about Geronimo, an Apache leader.  So, there's a bow and arrow.  I'm not sure how authentic that bow and arrow are.  I think they were made for show, but who can really tell?
The photos below are going to be an old telephone.  OK, this is before my time but I have seen the use in movies and such.  I remember the scene in Downton Abbey using a similar telephone.  Very funny.
This would not be a wild west story if there weren't revolvers involved so, I thought I would take a picture of these also. 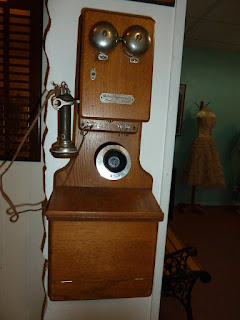 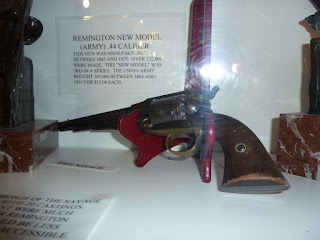 Next set of pictures are saddles with the some fabulous leather tooling.  It's so pretty.  I think so. 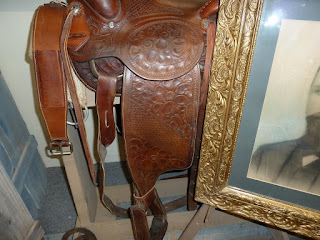 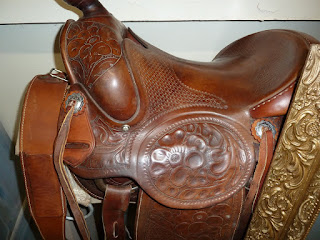 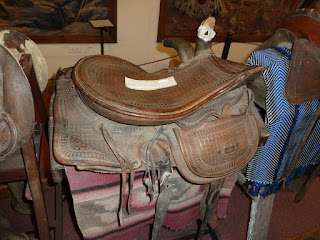 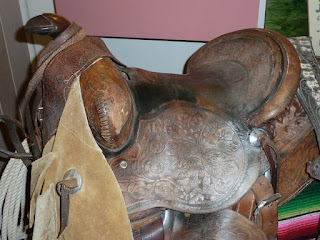 Aren't they neat?  OK.  Last but not the least, I got a picture of 2 more saddles.  I'm amazed at the work in these.  They just don't make them like these anymore. 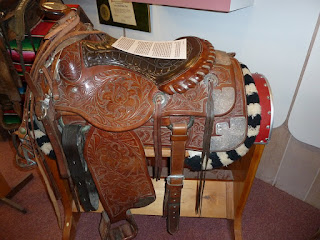 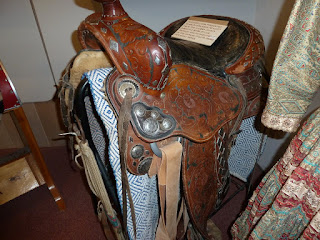 Are we tired of saddles yet?  The main reason the ranch sent me to this museum was actually to appreciate the pottery of the Mimbres people.  The pottery is a 1000 years old and I find it absolutely fascinating.  The art work on some of these is great.  In a later blog, when I get time (ha ha) I'll have a day that we went hiking up an archeologic site looking for broken Mimbre pottery pieces and then you can connect the dots, but for now, here's the pottery. 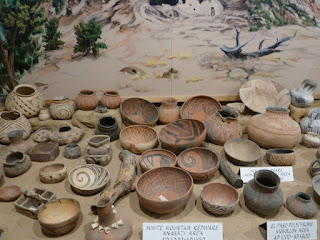 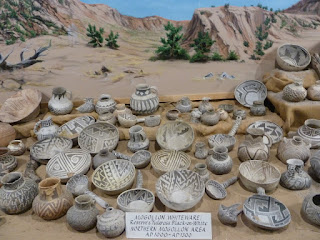 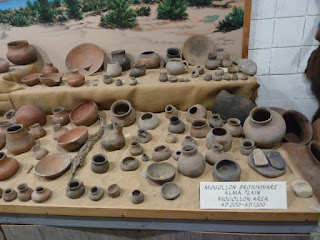 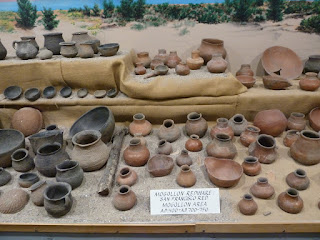 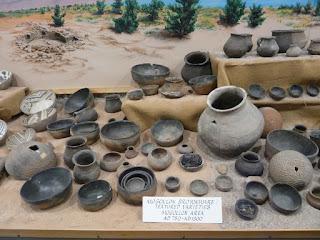 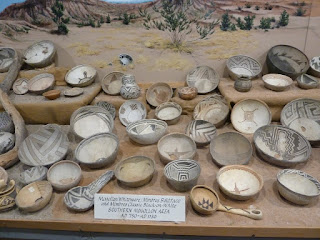 I'll end with a picture of a windmill and one of dried red chili peppers.  I don't know why, but it seems like the New Mexico thing to have them. 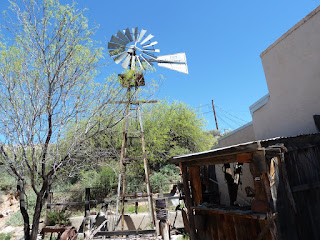 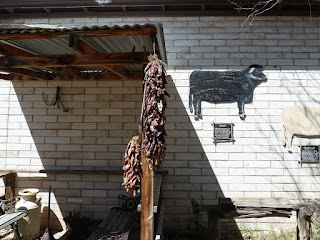 There were stories of the Apache kid and of course, Geronimo.  The ladies who worked at the museum had written a book about the area and things to see there.  It was all interesting, but my attention span only lasts so long, so I guess somewhere I stopped taking pictures.  I do believe this will give you a good idea about the museum.  I must make a disclaimer here.  As you can see with these pictures - it is a small town museum.  So, don't expect a big city Smithsonian type deal.  It is definitely a fun, eclectic little place to visit at T or C, NM.  Was a perfect way to spend the morning before our drive into Winston headed to the guest ranch.  More to come.

Thank you for reading and following me.  I apologize that I've been MIA, but it seems like that is my life.  I was going through the pictures in my camera and I'm behind by a few years.  *sigh*  The way I see it;  This is a start.