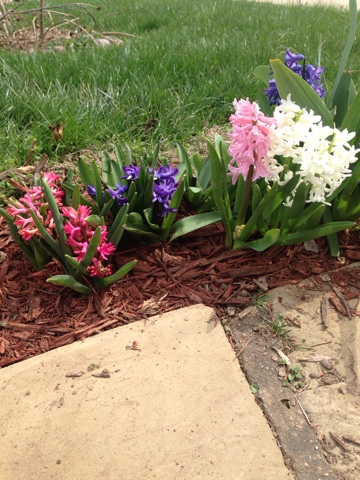 I've had one goal for my garden - to have some kind of flower from Spring until Fall.  I have fumbled with this since I have owned my home (for over 10 years).  The area near the front  porch started it all.

I started with chrysanthemums (called mums in short) and some grew, and some didn't.  When I thought I had that under control, I tried the tulips.
The tulips were beautiful and so the next year, I bought over a hundred bulbs, hyacinths and aliums and more tulips and I can't remember.
That's when the fight began. I was always dealing with deer but when my tulips didn't return the next year, I was dealing with a new enemy.  Moles!  There were other under ground rodents, I'm sure.  The holes, raised earth and upturned bulbs tore through my heart.  All that effort to plan the bulbs and what came up were a few hyacinths and the aliums.  The mums were fine but a new gardening struggle began.
Finally, I gave in and had my front porch area redone.  I have a workable space now and little at a time, while I fight the elements, I decided this year to document any progress.  My goal now is that every year must get better. If not better, at least give me a new solution.  I'm looking at my garden in a logical way.  What works and where?  I would love to have lilies line my driveway, but we'll get to those.
This picture below is the same as the one above.  It was taken March 18th of this year.  This is my documentation. 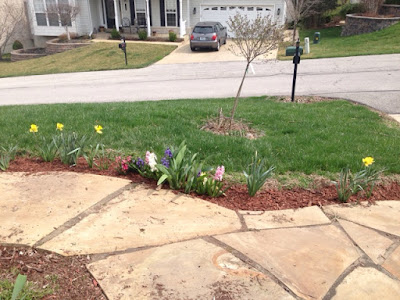 You will see the hyacinths in the center and some daffodils.  Three on the left and two on the right.  I will say that a week later (last week of March), there were 2 more daffodils that came up and they stayed on for a while.  Well, they started to wilt last week.  So, that's that. 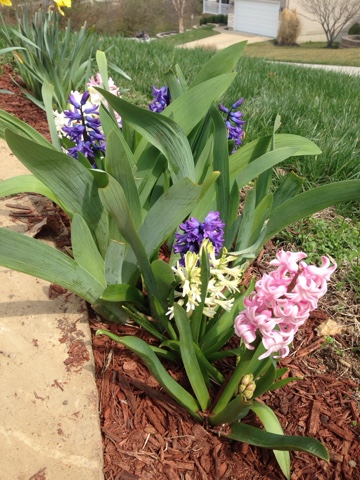 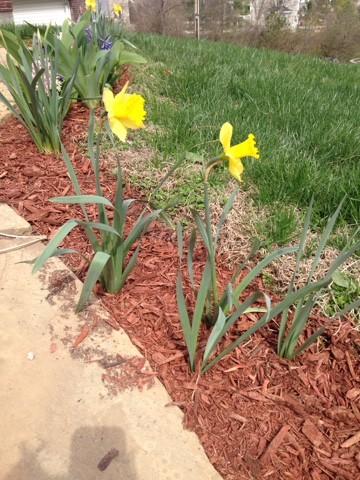 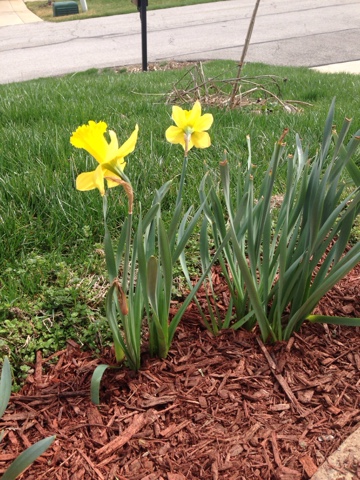 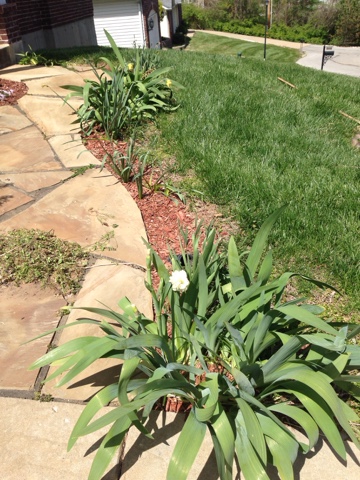 As you'll see towards the bottom of the picture, there's a single white flower.  I sound like a flower expert, but I've planted so many, being hopeful and some came up and some came up a year or two later and I've lost track.  That white flower?  I don't know what it's called.  I know it's beautiful.  I know there were 2 buds that came up.  Only one bloomed.

The plant at the corner, in front of the pretty white flower is the iris.  This was not the Iris that bloomed in November.  The buds look like it's going to be a white Iris.  Again, I don't remember what I planted.  I know I planted Irises.  I thought I planted the purple ones but it seems like in my garden I have a lot more white Irises and some combination white/purple.  We'll see as the year progresses.  I think the Irises will bloom in a week or so.  I'll be taking more pictures and do this blog again because it's my documentation.  I'm making notes, so if I plant more, I'll have to look for purple (the ones I don't have) or we'll just see. 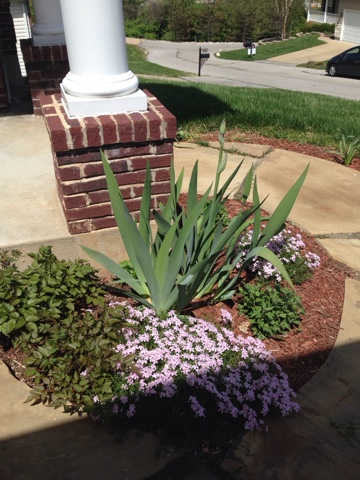 The picture here is the one area I'm actually proud of.  I feel like I have a grasp of this area.  It took me a while, but the ground cover is with candy striped phlox.  These are beautiful flowers and I had tried them in my original plan before I re-did my front porch.  These phlox are healthy and doing well.  The tall plants in the middle are Irises.  There are a couple of mums around the phlox and some lilies are growing behind the irises (cannot see in this picture). 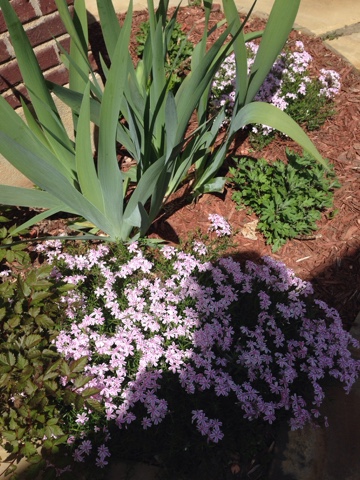 The plant on the left of the phlox and irises is one that I planted last year.  I don't remember the name but I remember that it was a flowering plant and it flowered in the summer.  Or so I think.  Last year, it didn't flower at all.  I let it go.  This year, we'll see.  The plant seems to be healthier and maybe it'll flower.  Maybe it won't.  For now, this area is not going to be fiddled with for another couple of years, till my Irises crowd out.

The lilies that line the driveway?  They came up.  Got eaten.  They are still growing a bit.  Who knows?  I don't think they'll make it.  They didn't last year.  But more to come about all that.

That's all for now folks.  This blog is really more for me than for you.  I really want my garden to be special and so little at a time, I'm working on it.