Hello folks. Remember my modeling project. Still working on it.  I ran into a bit of a road block with the French and the instructions.  I couldn't figure out what they were asking me to do as the translation had me make a "buckle" or a "bow" and well, I find out that it's a loop.  To be honest, I'm still not sure if I did this step correctly.  I guess I'll find out, but I couldn't be held up here forever, so I moved on after making these loops.  You can see them in these 2 pictures.  It's tricky because you have to get the loop through the holes and anyway, we'll see if all this effort on the loop was correct or not.  This is what I understood from the directions, so, voila. 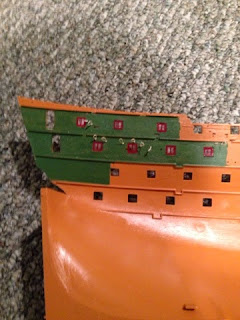 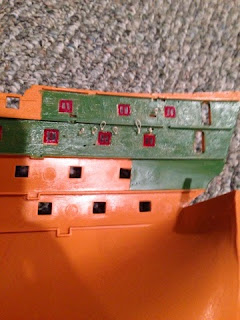 After these set of pictures, there's the before and after of the life boat.  The first one is still on the tree and the second one is off the tree and assembled, fully painted.  It did take several coats - 4 or 5 coats to get it to look like that.  Painting on plastic is interesting.  Sometimes, one swipe and you're done.  I guess it matters what color you are painting on what color!  You can clearly see the boat on the left still on the tree.  It has one coat of paint but you can see through that paint. 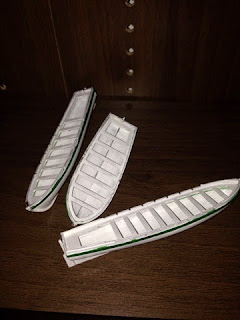 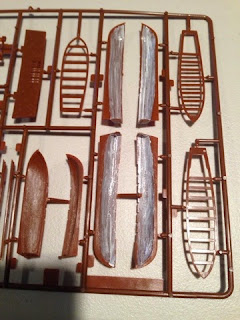 Painting white on brown takes a bit.  I also think it matters how well the paint is mixed because there can be settling.  I tried to mix it as best I could but I felt like I had a dilute solution of paint at times.  The most important thing I feel is the end.  I'm not even close to getting to assemble the giant parts of the ship.  Several small steps in the making, but it's inching along.

Next step in the process is intricate painting on the side of the Victory.  This one took me a few days to get done.  It's as good as I can get it.  I know it's not perfect and it never will be, but it's OK.  I just wanted it done the best that I can. 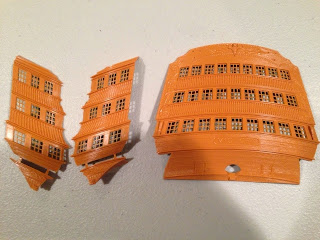 This is still step 3 and I'm still on the first page of the instruction book.  There are 8 steps on the first page.  At the end of this post you'll see cannons.  That's step 8 but anyway, back to this.  Painting!

Left is the outside of the ship.  Before it was done. 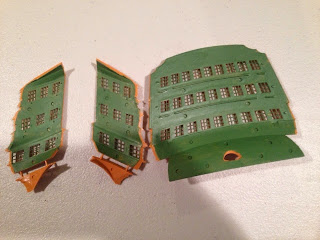 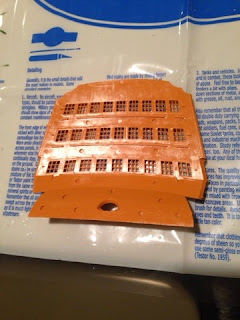 Flat painting is not a big deal at all.  All the intricate painting below and the painting of the smaller parts is more difficult.  You can see in the pictures below.  Lots of detailed painting. 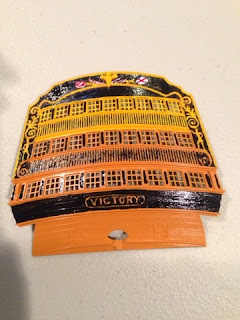 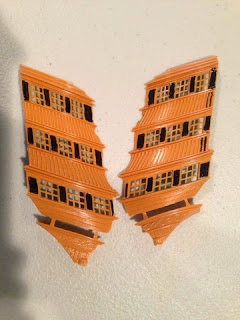 I don't know if I have pictures of the 2 little parts on the left fully finished but the picture on the right is the process it took to finish one side.  It's difficult to paint the yellow and the black but it's all done.  Next picture, bottom left is the close up of the one on the right. 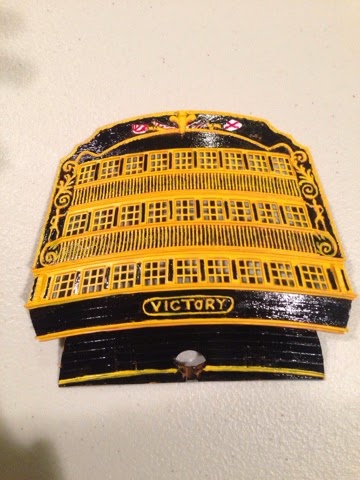 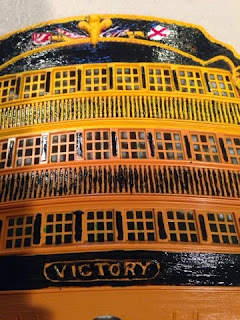 Here on the right is the finished product.  I'm adding 2 more of the close up on the fine details of painting this part of the HMS Victory. 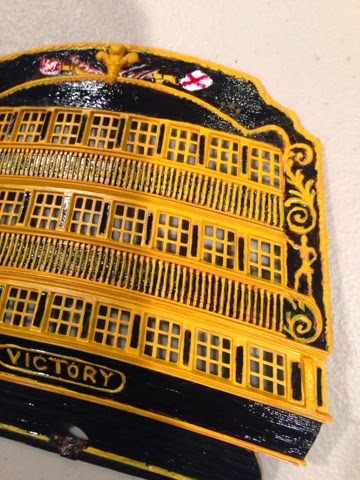 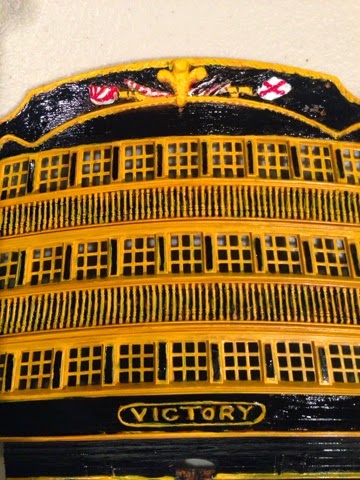 I know you can see the errors more clearly when you look at a close up but it is what it is.  This was particularly time consuming and I tried to get as close as I could to the original.  I used the smallest brushes I had.  Even doing the little swirls on the right side of the picture on the left was tricky.

The next picture is another close up on the center part of the finished side.  How long did it all take?  I think a week.  I don't recall.  I took a break after all that. 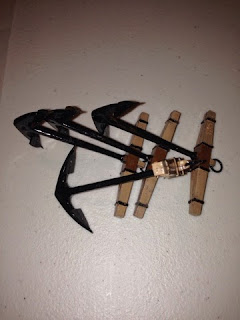 The bottom right here is a random picture of anchors.  I don't have the before on these, but it was not difficult.  I pre-painted them.  Assembly for these was
very easy.  I did have to add another coat of paint for the anchors after assembly, but it wasn't a big deal.


Last step for this post.  The infamous step 8 on page 1.  I'm working on cannons.  It's been quite a work in progress.  I thought I would be done with it 2 months ago.  I guess not.  There are about 600 pieces that make up all the cannons and that's more than a quarter of the parts assembly so I should not have been ambitious to think I could assemble them overnight.  There are 3 sizes of cannons to be assembled.  Here are the pictures of the parts and the assembly required. 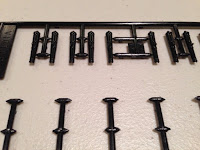 First step:  Put the cannons together.  See the picture on the right?  It's a picture of part of the cannon tree.  Top tree has a left and a right.  You can see 8 cannon parts.  Each part is half the cannon.  That would make 4 cannons.

Next picture has several assembled cannons.  They are not the same size as the ones on the tree on the right, but it gives you an idea of the assembly and what the finished cannons look like. 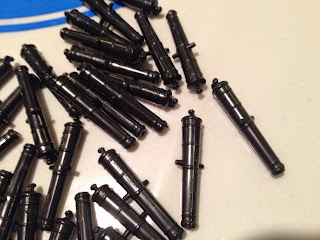 Next step is what I'm working on right now.  I should have pre-painted the next step but I assembled a few of the cannon carriages as you can see below.  I'm glad I didn't get far because post-painting would have been a pain as I'm beginning to realize on the 4 assembled cannon carriages. 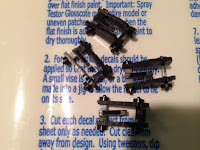 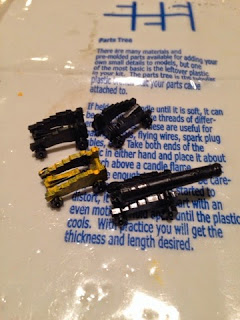 As you can see on the left is the assembled cannons but one of them has a coat of paint.  Only one of them with one coat, so far.  Also, when you look at the picture on the left, see the bottom carriage, it has a cannon on it.  That is ONE finished cannon.  Several more to go.  I think total of 120 cannons need to be made and 6 pieces to make one cannon.  Yes, I have my work cut out for me.

Last 2 pictures below are parts of the cannon carriage still on the tree.  The one on the left is before painting and the one on the right is after painting so I don't have to paint after assembly.  There's a lot more cannons to assemble but that's what I'm stuck on right now.  The tricky thing with assembly is that the parts don't stand on their own and there's no good way to clamp them.  As weird as it may sound, I'm having to hold the 4 sides after gluing and trust me, it's a look trickier than it looks. 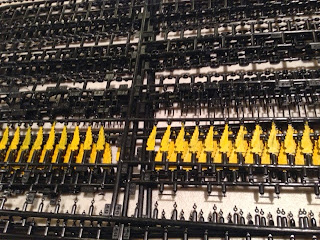 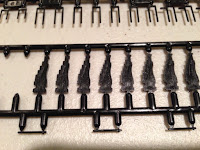 Anyway folks, that is all for this post.  Working with photos on blogger is a royal pain. :-(  I'm managing.  So, if you felt the pictures were out of whack and the script was all over the place, it's just myself having trouble with blogger.

Best always and until next time,
TTR